A few months ago Fowler’s health took an unexpected turn and as he sought answers and a diagnosis, his symptoms continued to advance very quickly. Ultimately, Fowler was diagnosed with Creutzfeldt Jacob Disease (CJD), a rapidly, progressing neurodegenerative brain disease, De Vos said.

“He was surrounded by his wife and daughters as he peacefully transitioned home,” De Vos said.

“This is an extremely hard and painful loss for us all. Yet we hold onto our faith knowing that death is not the end. Life continues beyond death into eternity with God. This is our hope as Christians. This is our belief due to the resurrection of Jesus that we celebrated not that long ago. In the midst of our grief and sadness, there is always hope because death is not the end,” De Vos said.

“I couldn’t think of anyone that had a greater impact on our community in my lifetime,” said Assemblyman and former Hackettstown Mayor John DiMaio.

Fowler grew up in Hackettstown, attending the same church in his youth that he would later lead after seminary school and roles at two other New Jersey churches.

At Trinity church, Fowler was known for organizing charitable initiatives through the church including the annual Midnight Run, mission trips, support for the Hoving Home Women’s Shelter in Oxford Township, and the Lord’s Food Pantry.

For decades, Fowler hosted “Let’s Talk About It” on WRNJ, which featured discussions with guests on local interest and current event topics.

“I encourage you to remember these things from Pastor Frank. FROG to Fully Rely On God because when you do “all will be well.” And all will be well my friends because Jesus is with us always,” De Vos said.

“Let us honor Pastor Frank by continuing his legacy by serving others and God through the ministries of his beloved Trinity Church. Trust that God will provide us with strength today and in all the days to come,” De Vos said.

Fowler is survived by his wife, Karen, his five daughters, Faith, Angela, Christina, Savannah, and Emily.

Funeral arrangements have yet be to announced.

The pastoral staff is always available if anyone needs to speak with someone. Just call the church office at 908-852-3020 and ask to speak to a pastor, De Vos said. 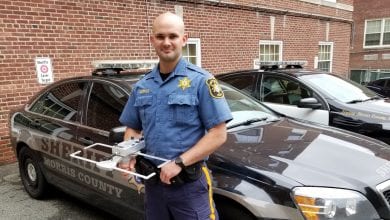 Driver found passed out behind the wheel with heroin, needle