MADISON BOROUGH, NJ (Morris County) – The driver who struck and killed a 68-year-old woman in Madison Borough has turned herself in to police, according to Morris County Prosecutor Fredric M. Knapp.

Cheon A. Lee, 58, of Chatham was charged on Saturday with second-degree knowingly leaving scene of accident resulting in death, Knapp said.

The crash happened at 5:13 p.m. on Friday. The woman was struck on Green Village Road near the intersection of Wilmer Street. She was pronounced deceased at Morristown Medical Center. The woman’s name was not released.

Following the crash, Lee continued in her Nissan Rogue north on Green Village Road, made a right onto Kings Road, and was last observed traveling eastbound on Kings Road past the Madison Area YMCA at around 5:15 p.m., Knapp said.

Lee contacted law enforcement on Saturday and allegedly took responsibility for the fatal crash. The Nissan Rogue was located in the area of Lee’s residence with heavy front passenger side damage consistent with the crash, Knapp said.

Anyone with information is urged to call Madison Police Department Detective Sergeant Paul Kosakowski at 973-593-3000, or Morris County Prosecutor’s Office Detective Micharel Bost at 973-285-6200. Anonymous calls can also be made to the Morris County Sheriff’s CrimeStoppers at 973-267-2255. 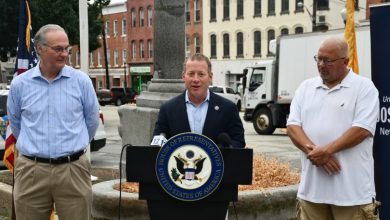