BLAIRSTOWN TOWNSHIP, NJ (Warren County) –Nine-year-old Josiah loves a good game of b-ball and wants to be the next Spencer Dinwiddie.

On Sunday, Josiah got to play with someone wearing a different type of uniform.

Blairstown Township police officer Joe Beach, who has been with the department for eight months, was patrolling High St when he saw Josiah playing basketball. He rolled down his window and said to him, “So do you think you can beat me?” Josiah replied “yes” only to be completely surprised when Officer Beach joined him in a game.

The two of them played basketball for 10-20 minutes.

“My son was so surprised and was ecstatic to have a cool officer play with him. You could see it in his eyes that he felt like the coolest kid to be playing with not only a cool adult, but a respected police officer,” Josiah’s mother Rachel Simpson Oleksiak told RNJ.

Their neighbor, 11-year-old Danica, was also outside and has decided she wants to be a police officer when she grows up, so she was so excited to see him pulled over and playing with Josiah, Rachel said.

After their game, Officer Beach let Josiah, Danica and Rachel’s two children sit in the patrol car and turn on the sirens. The officer was one of the friendliest police officers I’ve had the chance of meeting, Rachel said.

“Overall, seeing the joy on my kids face filled me with so much happiness as well. I think sometimes people assume police officers are serious people who are strictly enforcing the law, when in reality they’re just normal, nice people who are trying to make our town safer,” Rachel said.

“I think it’s so important to incorporate this kind of policing because often times a child only sees cops in movies or in the news, and they can be portrayed as mean, scary or even racist but creating a positive experience that a child can look back on can significantly impact their opinion of police officers. I would hope it not only creates a feeling of respect that my son would have towards police officer, but also that the officer can see my son, who is biracial, and know that he’s just a regular kid,” Rachel said.

“As the Chief of the department I could not be happier to see an officer interacting with the youth of our community.  We believe that as police officers we are part of the community and the biggest impact we can have is having a good relationship with our residence.  A simple act of playing basketball can make such a positive impact,” Blairstown Township Police Chief Scott Johnsen said. 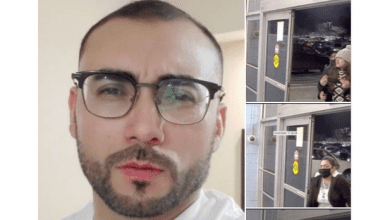 Hunterdon County Prosecutor, DASACC team up to recruit volunteers for those impacted by domestic violence and sexual assault