Older Americans Month is designated each May to honor older citizens for their contributions to the community, with the Commissioners noting that seniors should be celebrated as powerful and vital individuals.

This year’s Older Americans Month theme, “Communities of Strength,” highlights the strengths of older adults, putting special emphasis on the power of connection and engagement in building strong communities. More than 23,000 Warren County residents age 60 and older are recognized.

“There is no more fitting a theme than Communities of Strength as these seniors have shown how strong they are,” Commissioner Director James R. Kern III said.

“This is great proclamation and a great way to honor our senior citizens,” County Commissioner Jason J. Sarnoski said.

Kasia Briody, who chairs the county’s Aging Services Advisory Council, accepted the proclamation and noted that Warren County offers a lot of support and resources to help older residents age in place.

“What more beautiful thing to give to the seniors than a chance for them to be able to live in dignity and respect in the towns they helped build,” Briody said.

In conjunction with Older Americans Month, the Mary Louise Christine Award is given to a Warren County senior citizen who demonstrates a great passion for helping others and has served the community significantly. LaPadula, this year’s recipient, is currently serving, or has served, as the president of the Allamuchy Seniors Club, the Allamuchy OWLs (Older, Wiser, and Livelier Seniors); director of the Friends of Rutherfurd Hall, the historical mansion in Allamuchy; and a member of the Panther Valley Communication Committee and the Allamuchy Vision Committee. He is an avid photographer and a baker, sharing both his pictures and his baked goods with the community.

“I would personally like to thank Mr. LaPadula for helping seniors, especially in helping them get vaccine appointments,” County Commissioner Lori Ciesla said.

LaPadula was accompanied by his wife, Ann, and presented with a plaque from the County Commissioners. In accepting the award, LaPadula recognized Lakshmi Baskaram, director of the county’s Division of Aging and Disability Services, for her work on behalf of the county’s senior population. “Without her presence as director, I don’t think we could have come as far as we have in the past couple years,” LaPadula remarked. “I want to thank the commissioners for choosing me” as this year’s award recipient, he added.

Along with LaPadula, who received 11 nominations, eight other individuals were nominated for the 2021 Outstanding Senior Citizen of Warren County. They are G. Carol Cook, Fred Cook, Judith Fisher, Stanley Garrison, Lucille Hurley, Peter Jackson, Patricia Olds and Ann Stone. All nominees will receive a certificate of appreciation for the outstanding work they do for their communities.

“This past year really brought out the best in so many people and their willingness to do whatever they could to help those in need during the hard times of COVID-19,” according to a statement from the Warren County Division of Aging & Disability Services. 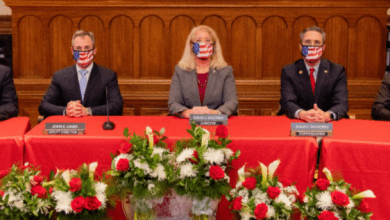