WARREN COUNTY, NJ – The Warren County Board of County Commissioners unanimously approved a recent resolution that calls for a 13-ton weight limit for vehicles on the section of County Routes 519 and 521 that includes the village of Hope.

The resolution will be sent to the NJ Department of Transportation but needs approval from municipalities along that route and the alternate route that trucks will be required to use in order to go into effect.

“After many months of meetings, studies and consultation with the DOT and other stakeholders, we have passed a resolution to weight restrict traffic through the historic center of Hope,” Commissioner Director James R. Kern III said. “This process has shown the importance of regional planning and how municipalities must work together and communicate with one another. I thank Mayor (Timothy) McDonough and the entire Hope community for their leadership and patience on this matter,” Kern said.

Hope Township officials and residents have long sought restrictions on truck traffic through the historic hamlet that is in the heart of the municipality, both for pedestrian safety and to preserve the 18th century buildings that line the roads.

Members of the Moravian religious community of Bethlehem, PA, settled in the area beginning in 1769, and by 1775 had renamed the village “Hope.” The Moravian experiment ended in 1808 but a number of their distinctive stone buildings still stand, used as private homes, a bank, an inn and restaurant, and more, while the township took its name from its principal village when it incorporated in 1839.

Resolutions of support would be needed from the townships of White, Knowlton and Blairstown, and the DOT Commissioner would have to grant approval.

County Commissioner Jason J. Sarnoski said, “DOT would need to see resolutions of support of those affected municipalities before allowing the weight restriction, noting the issue “will be decided by the municipalities and DOT.”

“The county also will forward a study it conducted examining the situation,” Sarnoski said. “I think Warren County has done its part with this resolution. We’re doing as we promised we would do.”

County Commissioner Lori Ciesla, who joined the board in January, said, “her colleagues and past freeholder boards have been working on the issue for years along with county planners and others. Ciesla thanked them for working to make sure we can get around the county and working to protect the village of Hope.” 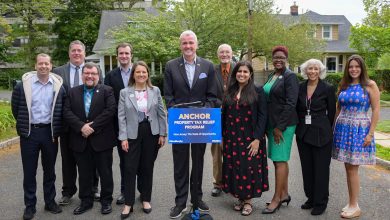