WEST AMWELL TOWNSHIP, NJ (Hunterdon County) – There were no injuries after a garage fire Friday in West Amwell Township, according to a post on the West Amwell Fire Company’s Facebook page.

The fire was reported at 5:15 p.m. at a residence on Mt Airy-Harbourton Road.

The fire chief arrived within 2 minutes of dispatch and observed a working garage fire with wires down across driveway. Multiple hand lines were deployed and a 500 foot supply line was laid up the driveway, authorities said.

The fire chief then requested the South County Tender Taskforce, the post said.

After waiting more than 2 hours for Jersey Central Power & Light to respond and cut power to the structure, crews were then able to extinguish the remainder of the fire, authorities said.

No injuries were reported. All units cleared the scene at 9:30 p.m., the post said. 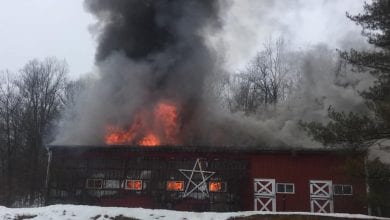