Justin Liebhauser, 19, of Randolph Township, and Gianni Aveta, 18, of Wayne Township were each charged with aggravated arson.

On July 22, a 53-year-old female came to the Beach Haven Police Department to report that at around 10:15 p.m. that evening, she had been struck by a firework explosive that was thrown from a motor vehicle, Billhimer said.

She told police that she was walking on Pennsylvania Avenue when a firework was thrown from the passenger side of a Jeep Wrangler, Billhimer said.

The firework exploded and struck her in the arm and rib area, causing her clothes to catch fire. Officers contacted EMS, and the victim was treated for second-degree burns to her arm, Billhimer said.

Then at around 11:30 p.m., Beach Haven police stopped a Jeep Wrangler matching the description of the vehicle described by the victim. The vehicle was being operated by Liebhauser with Aveta and three minors as passengers, Billhimer said.

An investigation by the Ocean County Prosecutor’s Office Major Crime Unit and Beach Haven Police Department revealed that Liebhauser was operating the vehicle with Aveta and the two minors as passengers in the area of Pennsylvania Avenue earlier in the evening, Billhimer said.

Liebhauser handed a five-inch shell mortar firework to Aveta, who then lit the firework and threw it out of the passenger side of the vehicle, striking the victim, Billhimer said.

Liebhauser and Aveta were charged and released pending a court appearance. 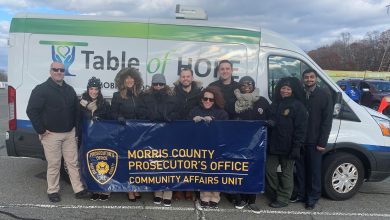